Recently, I committed to a new change, although much shorter scale and not as rigorous as completely removing animal products from my diet; I recorded what I ate on a regular day with no alterations to what I would typically consume, and then consciously ate only nonindustrial or unprocessed foods the following day. This change made me think a lot about the ways that my food got onto my plate and the implications of that process, especially since processed foods contribute to many of the food “additions” or health related problems that consumers face today. On the first day, I consumed several packaged foods, including the granola bars and microwavable macaroni and cheese. The first product contained ingredients like soy lecithin and “natural flavor,” while the latter contained corn starch, potassium chloride, silicon dioxide, and sodium phosphate. This last ingredient is a contributor to the excess sodium intake of many Americans; as Michael Moss clearly outlines, "'people get addicted to salt'" (13). Sodium phosphate is commonly used as an emulsifier in processed cheese, it “[neither] adds flavor or nutrition,” which worsens its stake in conversations about health and diet (Warner 46). 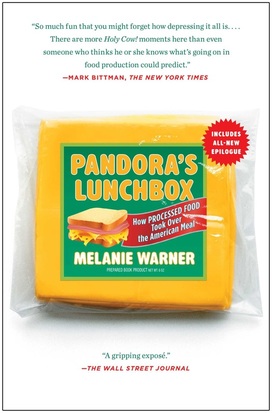 On the second day, when I veered away from consuming processed foods, I discovered that it was often difficult to distinguish something “processed” from something “unprocessed.” Melanie Warner defines a processed food as “something that could not be made, with the same ingredients, in a home kitchen” (xvi). Pizza dough, flour tortillas, bagels, and chocolate chip cookies could all be made from home; however, from my knowledge of the ingredients in these foods, they likely all contain enriched white flour. In the production of white flour, the problematic ingredients that complicate shelf life are removed, and this thus “[compromises] the vitamins” naturally found in the “whole” wheat (Warner 59). The lost nutrients are then added back into the flour later. The distinction between processed and unprocessed is blurred in some of the foods I ate, because I cannot be sure if I consumed a processed ingredient like white flour, or something like whole wheat flour.

Overall, avoiding foods similar to those that I ate on the first day was fairly simple! The only craving I got on the second days was for the Kit-Kats that I have stashed in my room. Most of the time, I find myself desiring fresh foods, especially vegetables. Generally, I only turn to processed, packaged convenience foods when I’m really busy or I have a craving that other foods just can’t satisfy. Although they aren’t always the healthiest choice, they make for yummy treats!

Below is the diary I kept from my two days of recording: