​
Case Study: The Vegetarian Who Loved the Most Hated Vegetable

​​Most children don’t beg their mothers to cook their favorite vegetable. However, one human specimen was quite the exception to this cultural rule; her name is Lindsay Mensch. Born September 8, 1997, the young girl had a palate quite advanced in the realm of plant-based food, noted by her affinity for broccoli. As a young child, the tastes reserved for adults mostly intrigued her. As a girl of no more than five, still enjoying drinks from her sippy cups, she had her first taste of coffee. Of course, it was composed of more 2% milk than the actual caffeinated drink, but for a while, that satiated her curiosity about the flavor of bitter coffee. 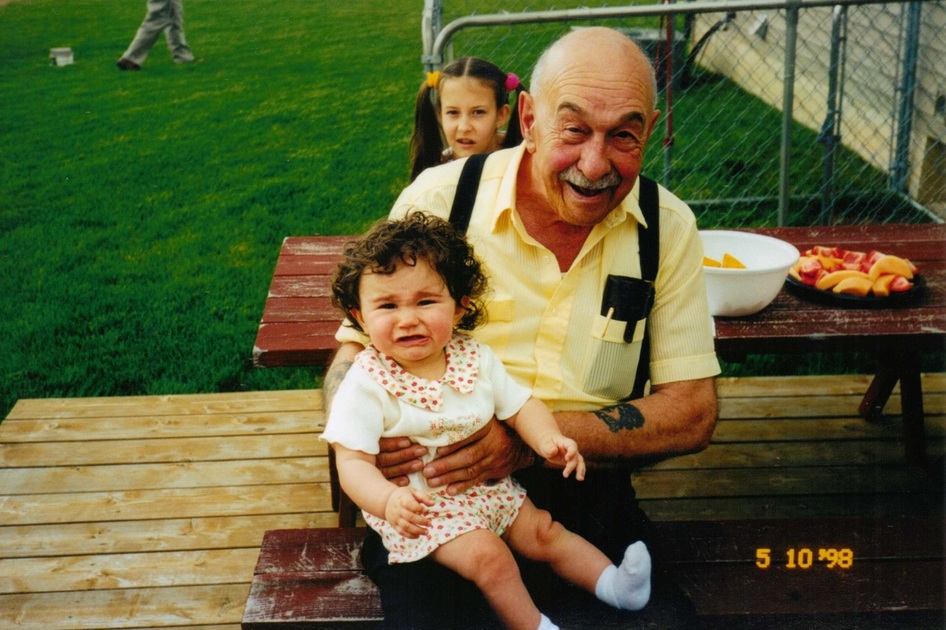 A 9 month old Lindsay, crying in her grandfather's arms. Probably because there was cantaloupe on the table behind her, which she once found to be disgusting.
Spending the first 9 years of her life an only child - before the birth of her sister Stephany - Lindsay was permitted to eat what she wanted, at least to some degree. A large number of her elementary school classmates brought Lunchables to school for their midday meal; this was something that appealed immensely to Lindsay. Whether due to a lack of agency in selecting lunch options or a desire to fit in with the Lunchable-eating crowd, she persisted in asking her mother Cindy to buy them for her school lunch. Cindy refused to surrender to this battle, in part because she was aware of the unhealthful and suspiciously processed options that the company included in their lunch trays (Moss 8). Since Cindy was raised in a home with very traditional notions of womanhood, it’s also likely that there was “the potential for guilt” for her as a homemaker, since using that convenience item would be a cheap substitute for her beloved daughter (Shapiro 63).

Most of the food on the table in Lindsay’s childhood, and still today, was made by her mom from home. Her mother’s desire to cook herself reflects not only her aforementioned desire to be a good homemaker, but also the savings she can glean from eating in. She believes in making the healthiest foods at the lowest cost, so her methods often involve “‘doctoring up’ the contents” of packaged foods with fresh ones, as Shapiro describes (64). As is often a concern amongst cooks, the proper preparation of food to prevent foodborne illness is extremely important to Lindsay’s mother. In the Mensch household, this concern can often manifest in tough, overcooked pork chops or dark, charred beef hot dogs. Of course, with the risk of meat contaminated by antibiotic-resistant bacteria, it is easy to understand why protecting family from these pathogens is essential; when anecdotes like that of two year-old Kevin in Food Inc. exist, mothers tend to take on a demeanor of responsibility and concern (although this responsibility does not necessarily fall on them). 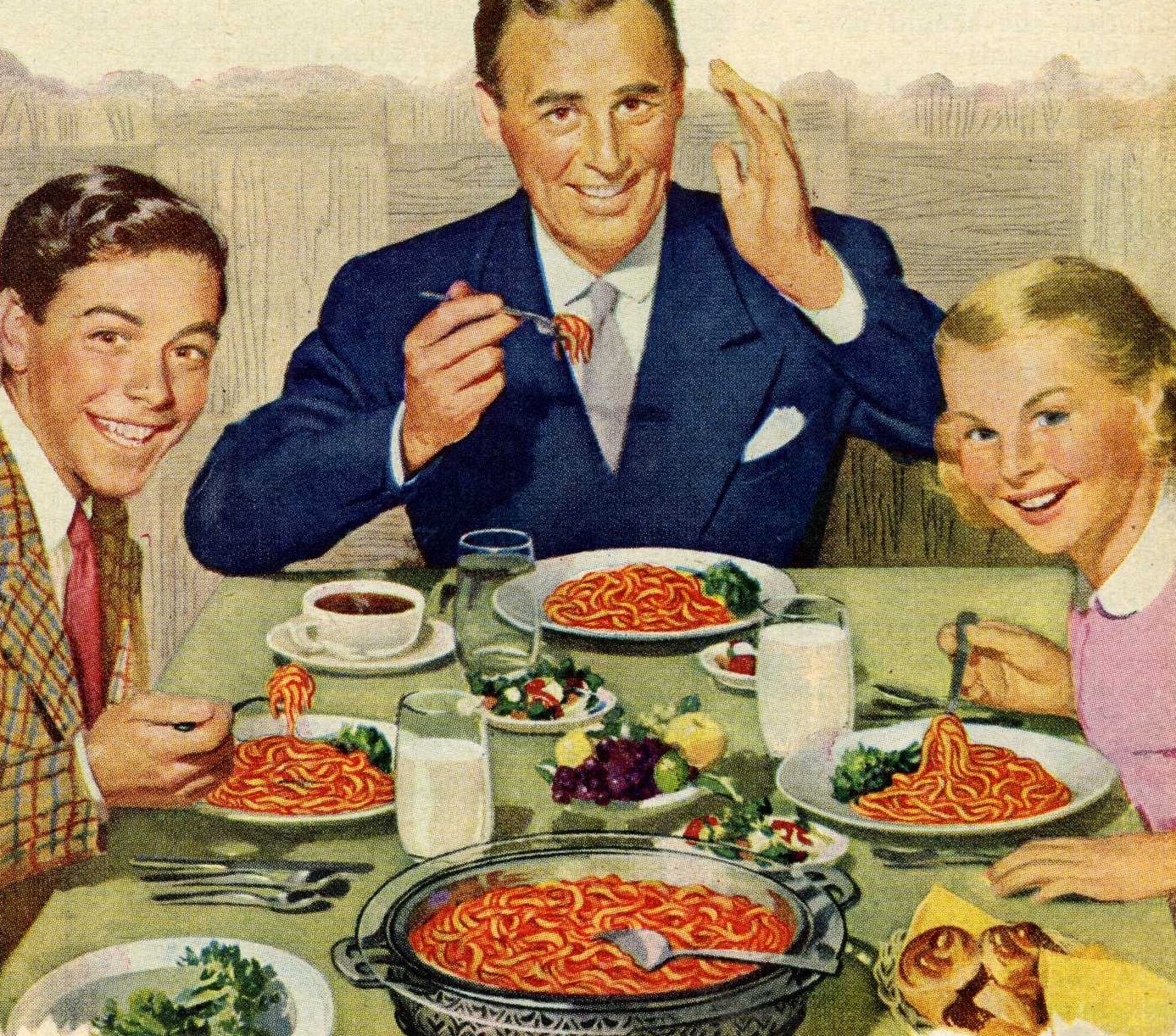 They are very happy to be eating dinner together.
With so much significance placed on eating from home, it is no surprise that the Mensch family accepted the American practice of eating dinner together each night. The social aspect of food is important in American culture, since it often signifies hospitality and promotes the ideas of shared family values. These cultural practices, while significant in and of themselves, would not be possible without the importing of foods from around the world. As Michael Pollan says, “There are no seasons in the American supermarket” (Food Inc.). The supply of tropical plant foods in winter, like bananas, is only possible through the globalization of food systems.

Aside from unrequited Lunchable dreams and family dinner, Lindsay gained another food memory still more strongly imprinted in her mind. In the summer of 2015, she traveled to Spain to improve her knowledge of the Spanish language and gain a greater cultural understanding of European life. Immersed right away on her first trip overseas, she stayed with a host family who cooked the most beautiful food - pizzas topped with rich jamón ibérico, a round tortilla de patatas served warm, luscious magdalenas valencianas to dip in cocoa to start each day. One evening, while waiting for dinner, the host mother’s son offered to pour their drinks. While reaching out to grab the open bottle of Coca Cola sitting across from Lindsay, his elbow knocked the entire liter back onto the dress that she was wearing. This would have been a minor inconvenience, if only her luggage had not been lost in the airport for the past three days and she had any more clean clothes. In embarrassment, but also in good humor, she stood and accepted the nightgown her host mother offered. Dinner that night couldn’t have been spoiled anyway; pieces of ham and cheese were wedged between two thin pieces of pork and cooked in oil on the stovetop, which made for a delicious meal.
In August 2015, Lindsay moved to East Lansing to attend Michigan State University. Many of her food habits shifted: some consciously, others unintentionally. By moving on campus, she began to eat at the dining halls, which provided an assortment of options that were sometimes new to her, like curry and spanakopita. It also allowed her to finally make a conversion to a vegetarian diet, which was something that was heavily stigmatized in her house beforehand. This was not a difficult transition, since her boyfriend at the time made many compelling arguments about the cruelty inherent in animal slaughter and the environmental degradation that stemmed from factory farming. She was never a perfect vegetarian, however; often, her cravings would get the best of her and she would slip up. Despite these slips, she learned a lot about vegetarian options and found creative ways to prepare her food. Her curiosity to try new cuisines drove her in this newfound fascination. Food Network and Tastemade have been two important mediums of exposure that have broadened Lindsay’s appreciate for food diversity.

A significant shift in her eating habits occurred at her summer 2016 internship, approximately one year after her love affair with food began. Independent from the campus cafeterias and her mother’s cooking, she had to plan her own meals, go grocery shopping, and prepare herself the food that she wanted to eat. It was her first food experience where she could truly be herself; she learned more about experimentation and proper methods in cooking, but also better determined the flavors she enjoyed the most. Differentiating between her mother’s cooking, her cooking, and the preparation done by other chefs that she watched regularly on TV helped her to escape her previous biases and connect personally with the food she eats.

While a large portion of what Lindsay eats is determined by taste preference, her morals also drive her selection of food. Beginning in September 2016, labeling her diet as "vegetarian" became problematic. Up until mid-November, she was eating meat at least two or three times a week, which was far more often than the occasional chicken she would eat once every month or so. After reading Eating Animals by Jonathan Safran Foer, she came face to face with the moral dilemma she'd been avoiding for so long. And that was exactly it; as Foer says in the text, the reason that many people are meat eaters is because they simply avoid the difficult moral question (Foer 114).

Environmental concerns about the foods she eats also shape her choices in regards to food; for example, she is more compelled to buy a tomato from a local farmer’s market in July than a zucchini that mysteriously arrives at Meijer in January. She would love to take on that moral challenge next; eating seasonally like Barbara Kingsolver can have a significant environmental impact just as reducing meat consumption can. Health is also a factor she considers, though not religiously as many nutritionally conscious people do. Eating too many fatty, sugary, and salty foods can make her feel physically unwell; nonetheless, a moderate amount of these items comprise her diet. Part of her affinity for these unhealthy foods may come simply from the wiring of the typical human brain (Moss 4); moreso, there is a sentimental attachment to some of the treats that she grew up eating during her childhood. Enjoyment is also important to her; the memories she has involving food are not only based on taste, but the experiences surrounding them. Rich chocolate cake is delicious on its own, but utilized in the celebration of American birthdays, the dessert might be considered significantly tastier.

Summer 2016: A wild Lindsay appears.
With an attraction to foods from her childhood and a fixation on food in the present, it seems that Lindsay Mensch is still an evolving creature. Throughout her lifetime, she has had experiences with food that have averted her, delighted her, challenged her assumptions, and completely transformed the way that she tends to eat. Indeed, all she has experienced in her Industrial Food class has expanded and challanged her notions about food, culture, and the environment. From understanding the way that privilege can impact the way she looks at the foods of others to learning about the systematic barriers to accessing healthful food, she has seen a shift in her focused passion for food. Although cooking is still a great source of interest, she is beginning to see a future working in the realm of environmental/food justice; after all, change is a constant in the life of a busy, indecisive college student. She will always love broccoli - but change is sure to continue.
About the Author
Lindsay Mensch. 19. Studying English at Michigan State University. Obsessed with Radiohead, cats, and carbohydrates.